The circles have puzzled scientists since their discovery two years ago 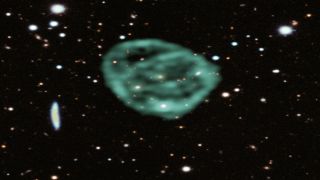 Scientists have just taken the crispest image yet of one of the universe’s most mysterious phenomena: odd radio circles. The stunning portrait could reveal clues about the origin of these enormous rings of faint radio waves that stretch roughly 1million light-years across.

Until now, astronomers had no idea where the rings came from, but the new observations of the five confirmed ORCs have revealed that three of the radio circles are looped around galaxies with supermassive black holes — black holes with masses that are millions to billions times the mass of the sun, and which sit at the center of most large galaxies. Since these black holes often throw out enormous jets of material, this location hints that the rings could be the result of a giant galactic explosion.

ORCs were first discovered in 2020 by a team of astronomers using the Australian Square Kilometre Array Pathfinder radio telescope. Now, the same team used South Africa’s MeerKAT telescope to capture an ORC in unprecedented detail, they reported March 22 in the journal Monthly Notices of the Royal Astronomical Society.

“We know ORCs are rings of faint radio emissions surrounding a galaxy with a highly active black hole at its center, but we don’t yet know what causes them, or why they are so rare,” Ray Norris, an astrophysicist at the Australian Commonwealth Scientific and Industrial Research Organisation, said in a statement.

After creating computer models of the faint and cloudy radio emission that MeerKAT had detected from inside the rings, the researchers came to the conclusion that ORCs were shock waves from a giant explosion, likely beginning in the galaxy and hitting the layer of tenuous gas just outside its center. The shock wave from this explosion would have accelerated electrons in the outer gas layer out of their atoms, creating an enormous magnetic field around which the energized electrons set about circling, spitting out radio waves as they went.

As for what is causing this giant explosion, the researchers don’t know. But seeing that most ORCs sit outside galaxies with an active supermassive black hole does narrow down the options. The researchers propose three possible explanations: ORCs could be remnants of a giant explosion in the central galaxy; they could come from jets of material thrown out by the supermassive black hole; or they could be shock waves from the birth of new stars.

The researchers say that to really get to the bottom of the mystery, they’ll need to access even more sensitive telescopes such as the Square Kilometer Array (SKA), a collaboration between more than a dozen countries including South Africa, Australia, the U.K., France, Canada, China and India which aims to build and bring online the world’s largest array of radio telescopes in Australia and South Africa by 2028.

Until then, the researchers will continue to study the rings and tease out further clues from their ghostly tracings on the night sky.

“People often want to explain their observations and show that it aligns with our best knowledge. To me, it’s much more exciting to discover something new that defies our current understanding,” study researcher Jordan Collier, an astronomer at Inter-College Institute for Knowledge Intensive Astronomy in South Africa, said in the statement.

Scan with your mobile phone!